Coingeneration.com, they’re still going at it. If isn’t scamming the first wave of members isn’t enough, stolen hundred of members in the half millions of dollars, making up fake promises, fake stories, delays, to kill time. To kill time so they can by-passed the the requirements transit time to withdraw members cash money to their bank and keep on repeating the cycle over and over again, one wave after another wave.

As of today, payments to members had stopped back in April 2013, from April to November were just fake stories, broken promises, delays reasons stories to kill time, and when the members speaks loud enough threaten to report coingeneration.com the local authority they decided to pay a few dollars here and there, but again stopped several weeks later.

The second wave of scam similar to the first but for new victims and sometime old victims that outsmart coingeneration.com and won some money. Coingeneration.com started to pay new members whom signed up in mid November 2013 onward (id# in the hundreds thousand). Well, for a while people get paid instantly and consistently, but a few weeks later people reported problem, then found out that coingeneration.com might have done an individual account monitor. Meaning coingeneration.com monitored each account and place them in special group to review and make best guess estimate on when the member will no longer invest or reinvest, and then stop paying them. Or basically coingeneration.com will pay for several weeks, and then stop paying, at least they pocket 25% or more of your original investment. Coingeneration.com will continue to make up stories professionally written news letter press release type of letter news to the members, making the members to believe in the story and willing to stick around. But, what coingeneration.com really doing is killing time, so they can have enough time to withdraw your money cash into your bank and cash out and closed out the account and continue to operates in this matter for a long long time. The cycle continue. Sadly a lot of people are falling for this scam, only a handful of people can outsmart them, and these are the people that go out and recruit victims for coingeneration.com in return they get 20% commission of the earning from the victims, and the victims suffers the loss, the recruiter does not care about the people whom they recruited, it’s sort of like the recruiter is the scammer not coingeneration.

So hopefully people realize the latest news letter released is just another scam coming your way, need to ask question and share the answers to everyone who might be interested, like posting on your blog and forums. However don’t expect all the question to be answered, coingeneration.com will answer question that they want to answer. If you ask question like where’s your stocks money? where’s your money earned since April 2013? where’s trading platform and so on, they may choose to ignore your question or answer to you in away that doesn’t help like in the past, when you ask them when payment? they say “soon”, very “soon”, and then “soon” those are their favorite answer.

By all mean. Do not believe their estimate date? whenever coingeneration.com give you a date, they never commit to that date. If they commit to that date, they give something else. Let say they say 4/1 they will five you cow for your farm, but on that day they commit but they gave you a hamster instead. You know how it goes, so be careful, do your homework. Ask questions and analyze. 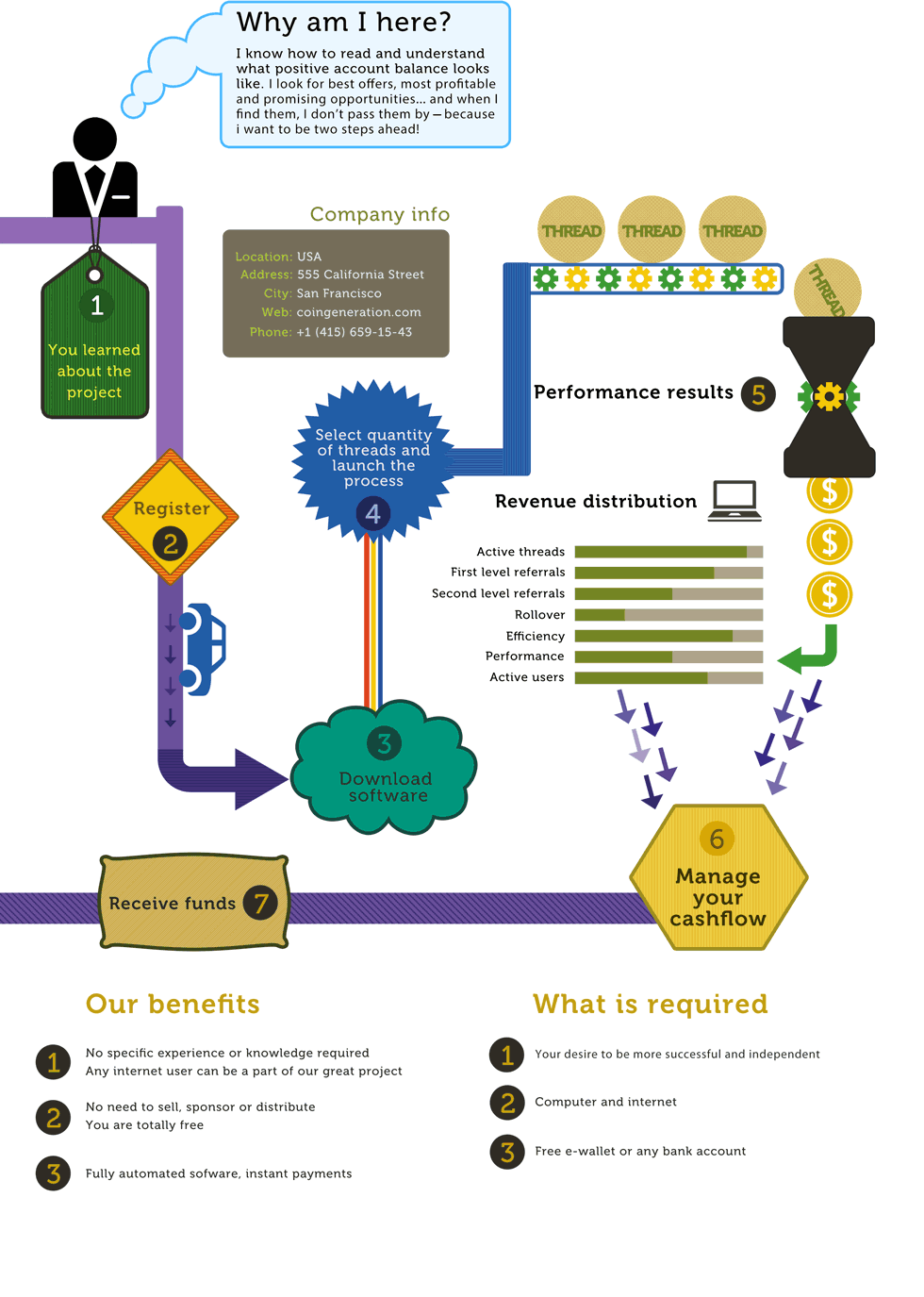 Back to the Future
Dear valued members,

It’s been a year since launch of the project and we’d love to share our plans for the nearest future.

We’ve done lots of work searching for BTC terminal distributors, and the first batch is to be installed in Slovenia and Holland already this week. Since we plan to install as many terminals as possible before the start of the Summer season, we are speeding up our production capacity and expect to go the full throttle already this month. We have accumulated loads of questions from people willing to buy a terminal, and to meet the popular demand, we are going to answer all your questions at once.

If you are serious about starting up a payment remittance business, the first thing you need to do is decide on your business model. There are two types of license we provide: exclusive and non-exclusive license for a particular area or city. These licenses differ by the allowed number of terminals sold to each individual buyer. For example, if you choose an exclusive license for a particular city, you become that city’s sole operator/distributor, which gives you an undeniable edge over other members planning to buy just a few machines. The minimum number of terminals one can purchase under our exclusive license ranges from 5 to 10, depending on the city’s population, and allows you to be a monopolist and restrict further sales in the area.

Those unable to buy an exclusive license can order no more than 1 terminal, and please mind that you cannot use your current balance to pay for equipment.

Orders and payments for terminals are accepted via BTC-O-Matic.com and all registered users at BTC-O-Matic will be given access to their terminal dashboards in a few days’ time.

As our chain of agents and distributors expands, every month 30% of our terminals will be provided on special terms. You can expect to receive a special offer if you are able to install a terminal in an attractive area or if you are willing to search for more distributors and sales agents yourself.

Our global objective is to build the largest terminal chain in Europe, and we are straight on track. Whenever we embark on a task, we get an iron grip on it and we are never satisfied until the job is done. When we know for a fact that the end justifies the means and that we are close to creating the largest cryptosyndicate, we just can’t help feeling happy about the idea that tomorrow there is going to be more money than today, which is why we want to share this happiness with you and cheer you up after long months of complex agitation in the fast-running Bitcoin waters. Starting 1st of April 2014 we are resuming payouts to all trial verified users and are preparing our portfolio for DG stocks repurchase. We still need to make a bit more effort to reach a comfortable balance of payments, and we hope you have enough patience to wait for the party to kick start! The fun is not far off, and we’d really appreciate your support at the moment when we are about to step into the limelight.

Wishing you success in business and cryptoprosperity! We’ve hit 1 year, and the fun is just starting.

Truly yours,
The Management.